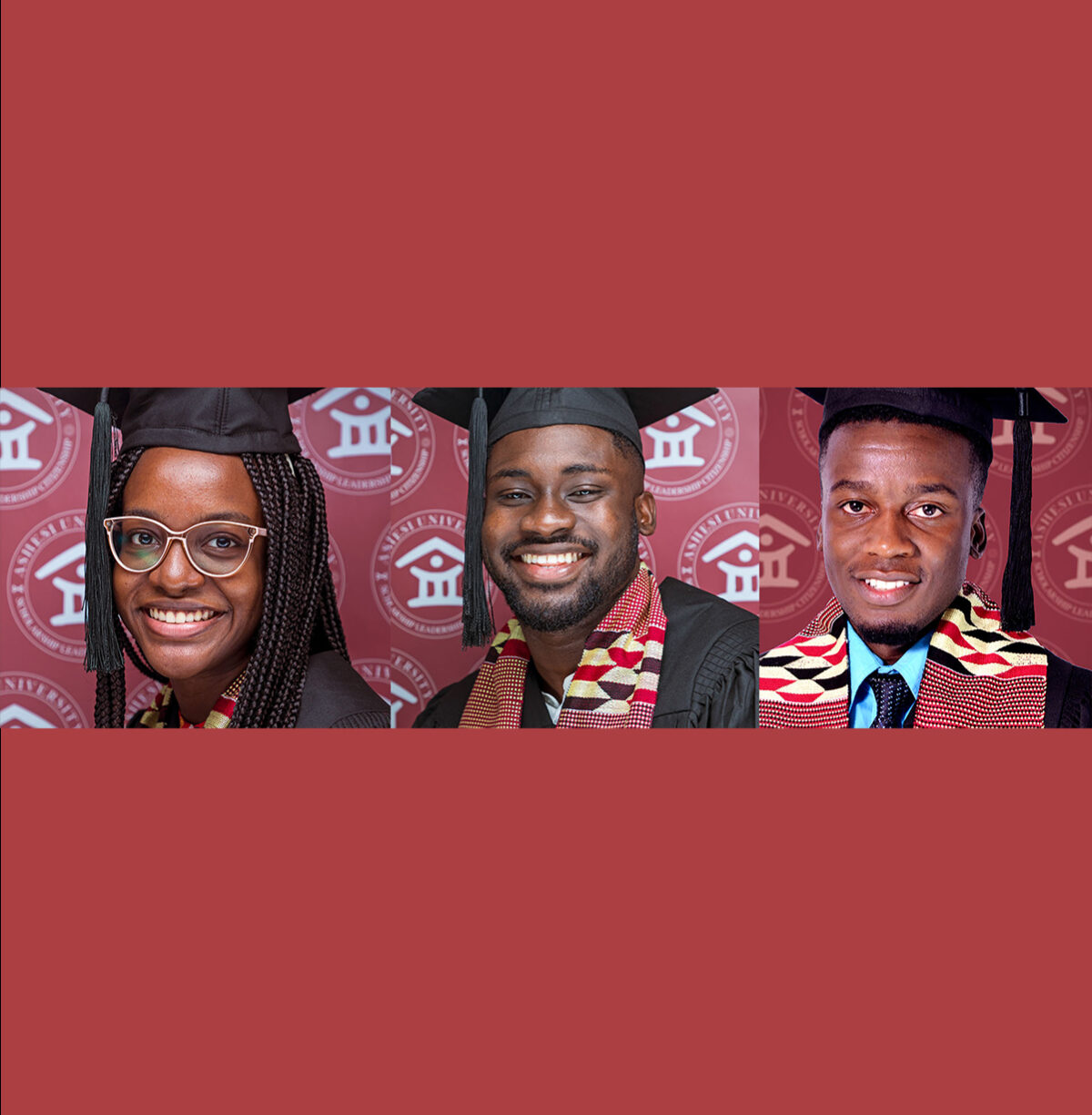 The Scholarship, Leadership & Citizenship Award is given to graduates who have lived out Ashesi’s core values during their time at the university. These awardees have contributed in outstanding ways to Ashesi’s mission and have had a strong impact on the Ashesi Community. This is the highest award a student can receive at Ashesi and it is presented by the President of the University.

Tamisha Dzifa Segbefia
Our first awardee is described as “compassionate, hardworking, ready to learn, strategic with her time, people person, and thoroughly honest.” She was extremely involved in extracurricular activities and yet a constant feature on the Dean’s List.

This student first volunteered as a campus ambassador, meeting with first time visitors, parents, and students alike at Ashesi to give them a tour of Ashesi’s facilities. Not only were the guests impressed by her exceptional communication skills and approachable persona, but she also often left prospective students with an aching desire to join the university. Her work as a volunteer continued with the paediatric haemophilia unit of Korle Bu Teaching Hospital where she helped slash a backlog of two years’ worth of data, to improve efficiency in the Child Health Unit.

During one of her programming classes, she worked with a team to build an application that would enable students to obtain credit for purchasing from campus stores by scanning for recyclable items. A solution whose scaling brings tremendous benefits to the Ashesi community. On the global stage, she was a member of the team of nine students who won the Silver Medal in the iGem competition in 2020. This is The Premiere International Synthetic Biology Competition held annually world-wide, to give students the opportunity to push the boundaries of synthetic biology by tackling everyday issues facing the world. The everyday issue, her team sought to tackle was the over 8million tons of plastic waste that are dumped into the ocean each year which harms the marine ecosystem, causes coastal erosion, and threatens human settlement worldwide. This team response was using a bacterium to breakdown the plastics into bio cement that grows on rocks at the coast thereby reducing erosion and creating a safer coastal settlement worldwide. The potential for this technology is clearly pathbreaking.

This awardee run for student council vice president and lost but graciously accepted to serve on the rival team’s administration as the Academic Committee Chair and found herself at the heart of efforts working with academic affairs office to maintain effective academic work when Ashesi moved classes online due to Covid-19. And was she busy: weekly meetings with the head of academic affairs to give feedback on students experiences online, regular check ins with students, a student representative on the reopening committee which was charged in developing protocols for safe reopening of the university and on and on. She still managed to serve as a co-director of the Hult Prize program, a mentor for Facebook engineers, and co-head of the Google Developers’ Group for Ashesi.

For so strongly representing the Ashesi ideals of Scholarship, Leadership and Citizenship, we present this award to Tamisha Dzifa Segbefia.

Our next awardee is a model Ashesi student – compassionate, dutiful, and very engaged with his community. In 2018, the office of the academic advisor at Ashesi decided to create an unpaid but more structured and intentional program to give peer-to-peer academic support. This awardee volunteered. He and the others who signed up became the foundation of a very successful initiative which is now a significant component of the support academically at-risk students receive at Ashesi.

He has been repeatedly recognized on campus and beyond as an exceptional citizen of the world, a scholar, and a leader: Recognized for the most Creative SDG idea by Postal and Telecommunications Regulatory Authority (Potraz) Zimbabwe, 2020; Global Finalist, Map the System, Skoll Center for Social entrepreneurship, University of Oxford, England, 2020; Awarded the Champion Trophy by Sustainable Ocean Alliance Oslo, Norway, 2019; Millennium Fellow, UN Academic Impact and Millenium Campus Network, 2018

In addition, he repeatedly appeared on the Dean’s list for his academic prowess, and more importantly made time to play for Elite FC – in the (APL) Ashesi Premier League. He is also founder and president of the African Transformers Club at Ashesi. In this role, he was heavily involved in Huduma Day activities. During these occasions, Mastercard Foundation scholars go out to implement acts of give-back in disadvantaged communities. His club led 75 students to clean beaches and conduct environmental sensitization exercises. Not only was he a founder of a club; he also made time to be an active member of others. He served as Vice president of the Ashesi Wiki Club and a member of the Ashesi Design Lab.

He took Ashesi’s message of continuous renewal literally, always probing, testing, venturing, and probing some more. He is a cofounder and chief engineer of LK FlighTech, a company that has won USD 50,000 in grants for its drone technology, and he will also be starting his doctoral program in AeroSpace Engineering at the Georgia Institute of Technology, in the US this year.

For so strongly representing the Ashesi ideals of Scholarship, Leadership and Citizenship, we present this award to Lloyd Teta.

Edem Yegbe
Our final Awardee is a combination of decency, positive energy, and open-mindedness. As underclassman, he became head of business development of the Ashesi Venture Accelerator where he organized pitches and networking events and the first major student trip to Silicon Valley as the AVA sought to expose students to cutting edge business and technology developments. He also served on the Academic Committee of the Ashesi Student Council. And did all this while maintaining a place on the Dean’s list for his strong academic performance. It was no wonder then that at the end of 2018, students honored him as the Rising Star of our Community during the annual Ubora Awards.

This awardee continued his work both for the AVA and the ASC to the very top. He became the CEO of the Ashesi Venture Accelerator in 2019, helping to deepen its work including developing an in-house model/template for supporting student ventures irrespective of which stage they find themselves. He went beyond the call of duty to offer his time and rich experience serving on the panel that selected the first batch of beneficiaries of the Mastercard Foundation sponsored Scholars Entrepreneurship Fund in 2019. He restructured and rebranded the Ashesi Venture Accelerator into the Ashesi Startup Launchpad to better serve students in the fast-evolving entrepreneurship ecosystem on campus. It was not surprising that with such a record of service and his exquisite people skills, students voted him as president of the Ashesi Student Council in 2019.

The first act of the newly elected president was to reach out to the rival team to appoint their president and vice president candidates as his Chair of the Outreach Committee and Chair of the Academic Committee, respectively. It was an inspiring sight when he backed his ex-rival and Outreach Committee chair to pull off one of our memorable community engagement events where they held a program at Adenkrebi (about 25mins drive from campus) on Valentine’s Day 2020. They had a get together for the whole community and as part of the festivities, held sessions on speed mentoring, responsible sexual conduct, and literacy games. It was a sign of great things to come for the rest of the year, but not in the way we anticipated.

In March 2020, Covid-19 intensified in Ghana which led to subsequent restrictions, closure of campus, and lockdowns. The pandemic tested every leader in the world severely and revealed the stuff every leader is made of. For this awardee, it showed us even more brightly what we have always known about him: a versatile, gracious, and incredibly strong character. This young man worked smoothly and confidently under immense pressure advising on solutions for academic, social, disciplinary, and housing issues with the university’s leadership. He led his ASC team with courage and good cheer in one of the most trying periods – never a harsh word, always smiling, always exploring solutions, always executing with flair and speed. If Ashesi is as strong today as it was before the pandemic, it is in no small measure due to the contribution of this young man who rallied students’ cooperation behind the efforts of faculty, staff, and the executive committee.

For his particularly exemplary and inspirational leadership during the period of crisis, and for so strongly representing the Ashesi values of Scholarship, Leadership and Citizenship over the last four years, we present this award to Edem Yegbe.