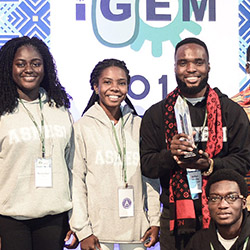 The Ashesi team, one of only two teams from Africa, was made up of Claude-Noel Tamakloe, Nana Oye Djan, Stephan Ofosuhene, Miquilina Anagbah, Justice Essuman, David Sasu, Abdul-Ghaffar Addam Appiah and alum Japheth Kelly. For six months leading up to the competition, the team explored synthetic biology, learning fundamental concepts and building understanding to be able to genetically engineer an organism capable of sensing, liberating, and quantifying the amount of gold in refractory ore. The process, known as bio mining, would eliminate the use of toxic chemicals in mining and safeguard the well-being of both the miner and the environment.

The team’s work was inspired by the national attention garnered by illegal mining. Successive attempts have been made to cut back on the practice due to its effect on the environment, and the lives it takes every year. “Growing up, I wanted to pursue genetic engineering to help create a cure for HIV,” said Nana Oye ’19, a Mechanical Engineering major. “So when I heard about iGEM, I figured it would be a great avenue to explore my passion in genetic engineering. By working towards a non-toxic approach in illegal mining in Ghana, I’ve gained a greater appreciation for the field.”

For over 10 years, iGEM has been encouraging students to work together to solve real-world challenges by building genetically engineered biological systems. Student teams design, build and test their projects over the summer and gather to present their work and compete at the annual Jamboree. This year, over 300 student-led teams from 44 countries from across the globe participated in the competition.

“iGEM offers a great opportunity for learning and innovation,” said Dr. Rosca who also volunteered as one of the over sixty judges for the competition. “I believed that getting students involved in this program would be a great introduction to the potential that synthetic biology has, and how this can be applied to solve national and continental problems. The most impressive accomplishment was the amount of learning that students had to accomplish in a short period. This makes me think how could I incorporate things like these in our courses. This was an impressive learning curve!” For their solution, the Ashesi team won the Chairman’s Award, which is presented to the team that best displays iGEM’s spirit and values. The team also won a silver medal for the work.

“While iGEM is largely about biology, this team made up of engineers had to tackle the problem of learning biology, building some of the equipment they needed and also tackling the problem of making gold mining safe in Ghana,” said Randy Rettberg, President of the iGEM Foundation, in presenting the award to the team. “All of that is solving a local problem, by local people to meet their local needs, and that’s very valuable.”

In recent years, synthetic biology has come to the fore of engineering and scientific research in tackling some of the world’s biggest challenges. However, in many parts of Africa, the discipline remains largely untapped. “In the future, it is expected that synthetic biology will provide an alternative for storing and processing data,” said Stephan Ofosuhene. “So I thought it would be nice to jump onto a solution that is expected to save computing. Through bio-mining, we learned various new concepts, helping us identify a number of areas where synthetic biology could play a key role especially in the Wester African region. It’s accomplishing to know that our solution will make it possible to extract gold in a non-toxic way, and help solve a national problem.” About iGEM
iGEM gives students the opportunity to push the boundaries of Synthetic Biology by tackling everyday issues facing the world. Made up of primarily university level students, multidisciplinary teams work together to design, build, test, and measure a system of their own design using interchangeable biological parts and standard molecular biology techniques.