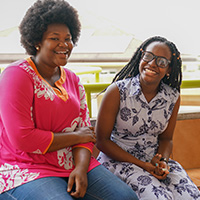 At Ashesi eating in lecture halls is prohibited. However, this is one of those rules that most people simply forget about, or in some cases, may simply ignore. Not Manuela, though – she usually goes out of her way to remind her classmates to not eat in the lecture halls, and in some cases, picks up after people’s mess.

So when her classmate Tamisha Sebefie ’21 ran into Manuela reprimanding a group of students for eating in class, she considered it laudable, and promptly nominated her as a candidate for Caught Being Good.

“It’s a rule that we so easily forget,” Tamisha said. “I thought it was a bit weird and admirable that Manuela took it so seriously.” In November 2017, the Office of Student and Community Affairs launched Caught Being Good, an initiative to celebrate everyday actions that make a positive impact in our community. With a goal to encourage each other to do good every day and live out the values for which Ashesi stands for, the initiative fosters a sense of community, responsibility and ownership.

“It’s really the simple acts done by people in a community that raises the image of that setting,” said Frances Awua-Kyeremanten, Associate Director of Student Affairs. “Our community’s growth, by and large, is built on the contributions of its members, in sometimes very small and almost unnoticeable ways, and we’d like to acknowledge and encourage them to keep being that asset. Through Caught Being Good, we hope to celebrate everyday people for everyday actions, and start a chain-reaction of people always seeking to do good.” When Dejoie Ifashabayo went to pick up a book from a friend’s room, he noticed one of the occupants had  fallen seriously ill. He managed to mobilize a few others, and helped him to the Health Center

Every month, members of the community nominate students they observe doing random acts of good. Following this, a committee of students, staff and faculty vets the nominations and selects up to five students who are publicly acknowledged for their actions.

For Melanie Kwarteng, who went to the aid of a librarian who was overwhelmed by a barrage of students trying to process their requests at the library, helping others should be second-nature. “Good deeds done out of love will help us will encourage others to do same,” she said. “You are the light of the world. Let your light shine before others so that they may see your good works.” Other students who were Caught Being Good in January 2018 Matthew went around campus picking up pieces of litter from the lecture halls, canteen and hostels