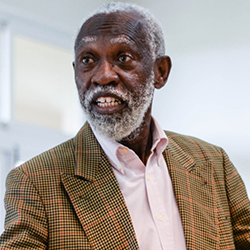 September 28, 2016
On December 7, 2016, Ghanaians will head to polls to elect the next President. Undoubtedly the discussion on who is the best candidate for presidency makes for heated debates. Ashesi lecturer, Professor Strephen Adei shares three important areas from his books (The Purpose of Leadership and Leadership and Nation Building) he believes should be used as metrics in deciding who to vote for. Professor Adei is lecturer for Leadership 3 and Economic Development at Ashesi.

In choosing an individual for presidency, we need to look at the character of the person, in terms of their ethics and their credibility. Because more often, this translates into how they perform: their likelihood to be corrupt and even their sexual morality. Eventually it all leads to the type of leader we have.

The second is competence. Competence not in the terms of professional competence in engineering or economics, but he or she has to have the capacity of providing a national vision, have the ability to put together a competent cabinet and also the ability to mobilize people. The individual must have the ability to put the right people in charge of monetary and fiscal policies and be able to model and create the atmosphere for others to work effectively. A leader who rules based on partisan interest has missed it. Ghana is bigger than any political party. If you want to exclude the Ghanaians who are not in your party, you will end up missing the target.

Finally, care. When the leaders have their people at heart, their desire is not to enrich themselves. The think about the general welfare – provision of basic education basic education and basic healthcare. The day-to-day needs of the people must be met.

If we apply these three steps, instead of voting according to party and tribal lines, we will be on course to make a good decision for president. It is also the responsibility of the youth is to register to vote, to vote and to make sure your vote counts.