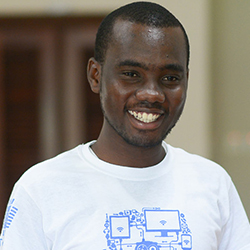 December 8, 2017
Senior Derick Omari ’18 has been named recipient of the 2018 Queen’s Young Leader’s Award for his work in boosting IT literacy in underserved communities in Ghana. Derick, one of 60 awardees, was selected from a pool of over 4,000 finalists from across the Commonwealth of nations.

Established in 2014, the Queen’s Young Leader Award recognizes and celebrates exceptional people aged 18 to 29 from across the Commonwealth, who are taking the lead in their communities and using their skills to transform lives.

“I would like to congratulate the winners of the Queen’s Young Leaders award for 2018,” said Prince Harry of Wales. “This award recognises the enourmous efforts and courage of these inspiring young people who are tackling some of the Commonwealth’s most pressing challenges, and inspiring others to realise their full potential. What has always struck me about these young people is their humble but passionate determination to make life better for their communities. They really are transforming the lives of those around them, and in some cases, far beyond that. If more of us follow their examples we can make our communities, our countries and the Commonwealth a better place.”

In 2015, Derick founded Tech Era, a community engagement initiative aimed at equipping underprivileged children with IT skills, and also to raise IT professionals from underserved communities. Over the past year Tech Era has expanded its impact, training over 80 children, and also extending its reach to the disabled, helping to teach the visually impaired to use computers.

“My greatest desire has been to make a substantial positive impact in Africa,” the Business Administration major said. “To receive the Queen’s Young Leaders Award along the way to this dream is a great honour; it propels me miles closer to making this passion a reality. My heart boils with eagerness towards the coming year: it’s an opportunity to draw inspiration from like-minded change makers from around the world.”

Derick also started the Berekuso Music Project, an after-school initiative to teach the pupils to play musical instruments. A talented musician himself, Derick, started the initiative as a way to expose the Berekuso kids to opportunities outside the classroom.

Winners of this prestigious Award will receive a unique package of training, mentoring and networking, including a one-week residential program in the UK during which they will collect their Award from Her Majesty, The Queen. With this support, Award winners will be expected to continue and develop the amazing work they are already doing in their communities.