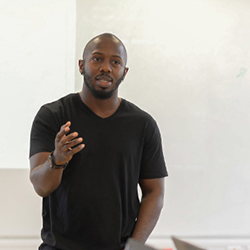 September 29, 2017
Emmanuel Acquah ‘09 has always been on the lookout for new challenges. So in 2005 when a friend told him about a relatively new private university trying to do things differently, he halted all plans he had been making towards other universities and decided to try Ashesi out.

“Back then, Ashesi wasn’t like what is now – virtually unknown and untested,” he explained. “For me, choosing Ashesi was based on two reasons; I wanted something different and I wanted to take on a challenge, so it fit right into what I was looking for.”

Nearly ten years after choosing Ashesi, and subsequently working for multinationals in Europe, Emmanuel is taking on new challenges, this time as the Chief Technical Officer of 360Living, a tech start-up in Berlin, Germany, that connects consumers with furniture makers. In his role, Emmanuel manages a team that works to maintain a high-level customer-consumer experience on their platform. “360living caught my attention because of my belief in its core fundamental and disruptive idea to make furniture more affordable and accessible to everyone, by cutting out the middlemen and connecting furniture manufacturers directly with the end consumer,” he explained. “Also, I felt it was time to step outside the comforts of working with a bigger, less risky company and experience the full life-cycle of a proper start-up: seed rounds and rapid expansion.”

Giving Back
Emmanuel’s biggest challenge yet has been outside his regular work. He has been figuring out how he can contribute to improving tech in Africa, particularly in Ghana. So in 2016, he pulled together a team of tech professionals passionate about development in Africa to start A Better Africa with Tech (ABAWT). “ABAWT was born from my personal need of a meet up that shared common interests in technology and Africa,” he said. “I couldn’t find any in Berlin so I decided to set one up myself. A year and a half after its inception, ABAWT has grown into a platform for people to validate their African-related startup ideas as well as a networking space to connect people in charge of projects in Africa with people interested in working on them.”

A year after founding ABAWT, Emmanuel’s yearning to give back brought him closer to home. When he learned about 10academy, a non-profit program seeking to train young graduates across Africa for rapid transformation, and their plan to host its pilot at Ashesi, he immediately offered to be a facilitator.

“I’ve met a of people seeking to run initiatives like this in Africa. However, one of the issues has been their goal to train them for the Western world,” explained Emmanuel. “So when I learned that 10academy was looking to train young Africans to help impact African countries, I bought into it.”

For Emmanuel, while he’s building knowledge and gaining exposure on the tech scene in Germany, he’s also seeking out ways to settle back home at some point.

“I’m gaining very good exposure and experience here,” he said. “I’m the kind of person who pushes my limits everyday, and I’ve learned so much from a tech perspective that I want to apply when I come back, and obviously with that exposure, it’s easier to spot the gaps in this market when you come back.”