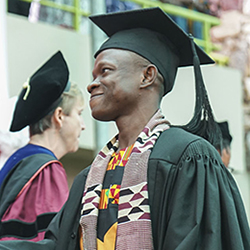 June 28, 2018
As a student at Ashesi, whenever Joseph Wukpan ’18 had some downtime, he would visit the Abuom Junction Filling station, a few kilometers from campus, don an attendant’s uniform and help fuel cars. He didn’t do this because he needed extra cash, but for him, after gaining admission to Ashesi University as a MasterCard Foundation scholar, this was what kept him grounded.

After all, it was at this gasoline station that his story begun.

“My Ashesi story is incomplete without the Abuom Junction Shell filling station,” explained Joseph. “It was here I first heard about Ashesi, while working as a fuel station attendant. This is where it all started. So whenever I can, I go back to reconnect with people I used to work with, and most importantly, to inspire them –  it’s my way of giving back. My hope is that my story inspires other people to chase their dreams like I did.” However, five years ago, Joseph’s story was much different. After graduating from high school, he had to take up a job as a gasoline station attendant, as his parents could not afford to pay for his college education.

“Choosing to work at the filling station was a difficult one,” he said. “However, this was the only my way of saving up for college. That was my reality, so I had to make the best of it.”

Soon, Joseph rose to become the station manager, where as part of his job, he interacted with clients who included some members of the Ashesi community. With time, he grew an admiration for the Ashesi folk, and learning more about the institution, he started considering it as an option. “Through my interaction with staff and faculty at Ashesi, I learned more about the school, including its financial aid opportunities,” he said. “At that point, I realized that if I had the chance to go to any institution, it would be Ashesi.”

Soon, he applied to what had become his dream school and was accepted as a MasterCard Foundation Scholar. “Getting a scholarship to attend Ashesi was life-changing,” he said. “The opportunity to go to college without having to deal with associated costs is a gift. Given this opportunity, I made it a point to strive to give back in anyway possible.”

As a student at Ashesi, Joseph took advantage of the opportunities that came his way. While excelling in the classroom, he also secured an internship with leading oil company, Tullow Ghana. Outside the classroom, he was equally active. From successfully acting as the head of the student-run football league to starting an on-campus food delivery service, Joseph played a significant role in the community. While graduating from Ashesi means Joseph might not be able to spend as much time at the filling station, being an inspiration to others, it will always be part of his story. “In high school, the thought of going to university wasn’t one we took very seriously,” he said. “However, during my time at the filling station, I got to learn more about myself. I started thinking about the kind of brand I wanted to stand for. It was at the filling station that I realized Ashesi was the ideal place to give me the experience I wanted. Ashesi encouraged us to aim high and pursue goals that before I thought were unattainable. Wherever I am, I’ll use my story as an inspiration for others.”