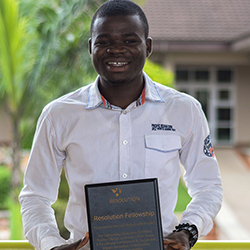 September 5, 2016
Gervase Adams ’17 grew up in a community of subsistence farmers in Wa, Northern Ghana. Most of the community members, including his parents, were farmers who depended on the rain for their crops to grow. As such during the dry season, which runs for close to eight months in Northern Ghana, they were virtually be jobless. During these times, Gervase and his friends were responsible for their own upkeep.

“During this period they are unable to pay for my fees, so I had to do all sorts of jobs including selling second-hand clothing, carting produce in the market places, selling kerosene door to door at the night, doing dry season gardening and anything I could do to make some money,” he explained. “I struggled to find a balance between working to earn a living and learning in school.”

After earning a scholarship to Ashesi through the Mastercard Foundation, Gervase had been seeking ways to impact his community, so when he heard about the Resolution Social Venture Challenge at Baobab Summit: Ghana 2016, he signed up. His idea, a low-cost irrigation farming project for vegetable farmers which aims at improving the incomes of these farmers significantly and reducing the rate at which children drop out of school in his region.

“I started school with about 250 students in my year group from primary school but only 27 of us completed Junior high school,” he said. “Right now, only two of us from that class made it to the university. Most of my friends dropped out, some are in illegal mining, most of the young ladies have been married off and some of the boys have become thieves. It was all because their parents did not have enough from their rain fed agriculture to support their education.” For Gervase, the challenge would be an opening to positively impact his community. After several rounds of pitching, Gervase emerged one of the five winners awarded the Resolution Fellowship from this year’s summit.

The Komaale Initiative, as Gervase calls his idea has one simple task; to turn low-income subsistence farmers into middle-income earners through low-cost irrigation farming. “I believe irrigation farming during dry seasons is one of the ways to sustain the incomes of parents during dry seasons,” he says. “It is even more lucrative than regular farming during the normal rainy season. The project will, therefore, increase incomes of farmers, provide them with jobs all year round, increase children enrollment in school and reduce drop out rate.”

For Gervase, the fellowship has helped impact the next steps he hoped to take following Ashesi. “It has shaped my direction and dreams and carrier in the future,” according to Gervase.”I am currently working on registering a non-governmental organization and pursuing a masters degree in Agricultural Economics hopefully next year after graduation.”