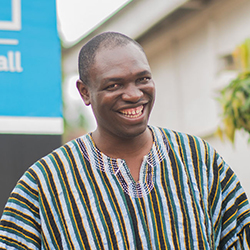 While this was a huge milestone, the technology that made this possible was developed and deployed by a team from a small tech firm in Ghana, called Genkey. A key member of this team was a young programmer, Hannan Yaro Boforo ’10, who had graduated from Ashesi two years prior.

“It’s such a good feeling knowing that code I wrote and the work I did directly impact the national elections,” he shared. “For a company that had less than 10 people to drive such a large-scale project, it was definitely an impressive feat.” Since then Yaro has led efforts to implement biometric voter verification in other African countries including Cameroon, Tanzania, and Mozambique. Recently, the team has broadened their scope; implementing similar technology in healthcare and in social intervention programs.

According to the United Nations, an estimated 1.5 billion people do not have any form of identification that can be reliably verified, and 78% of that number is in Sub-Saharan Africa. As a result, these people are cut off from basic services and rights such as access to financial services, access to education, access to health, social welfare benefits and are disenfranchised: unable to have their say in their country’s electoral process.

Using biometric identification as a solution, the team at Genkey is working to plug this gap. This way, particularly in elections, their technology prevents multiple registrations and serves as a secure verification system for voters who show up to cast their ballots.

For Yaro, Genkey presented a unique opportunity to hit the ground running as a young professional. More importantly to him, it was an opportunity to make a difference in the lives of others. “In 2010, Genkey held a registration exercise for students at Ashesi, and they applied biometric technology in collecting the data,” he said. “That piqued my interest. Most people who go through school will like to use the skills that they’ve learned in school to help improve the society that they are in, and for me, that’s very important. Learning more about Genkey, I realized they provided the right blend of hands-on experience and social impact for me.”

As a Computer Science student at Ashesi, Yaro had been involved in projects to create impact for his immediate society. Spurred by lessons of service from his Leadership class, Yaro created an application aimed at helping the police mitigate crime in Ghana. While that gained some national attention, the project would require more features to be fully functional. However, at this point, he was convinced he wanted to use technology to create tools to impact society.

“The fact that we have a course called Leadership, that teaches you to serve your community left a huge impact on me,” he said. “Wherever you find yourself in whatever little space you are, you recognize you’re accountable. And Ashesi teaches you accountability.” “We recognize the value that having an institution and environment where there’s emphasis on practical application of knowledge brings to an organization,” said Seth Akumani, Director of Business Development and Marketing at Genkey. “When Yaro and the rest come through we see that they’ve had that initial exposure in trying to apply some of the concepts that they’ve learned in school. It gives them the ability to hit the ground. The other things like work ethic and ethics help to show that they have not just the knowledge but also that attitude to get things done, and in time to achieve the goals set for ourselves.”

For Yaro, Ashesi was a launchpad to develop skills to create impact, and through Genkey, he has lived this reality. “It hasn’t always been easy working to implement our solutions, especially considering our size,” he explained. “However, the thought that you’re doing something groundbreaking for your country and recognizing the positive outlook it has is why I still keep working in this space.”