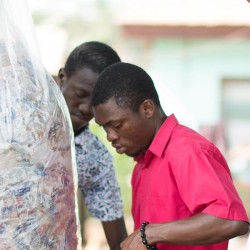 November 6, 2016
In 2015, as part of the Beautiful Berekuso initiative, the Ashesi community joined the Berekuso community in a clean up exercise. While the goal was to promote good sanitation in Berekuso, a year later, the shift towards better sanitation still has some way to go, and waste management is still an ongoing challenge.

For third year student, Kwabena Adu-Darkwa ’18, an effective way to keep Berekuso clean is by providing a sustainable and collaborative sanitation system. With funding from the Ford Foundation, Kwabena started the Ahote Project to help reboot waste management practices.

“My motivation comes from the concern about pollution,” he explained. “I believe if we are able to control the amount of waste that goes to the landfills we can drastically reduce greenhouse gas emissions. This can be done if households embrace the proper waste management.”

Providing incentives to the people of Berekuso
By starting the Ahote project, Kwabena and his team seek to teach the habit of recycling and composting to members of the Berekuso community. Currently, the team has started off with recycling and composting. Acting as the middle men between the town folk and recycling companies, the team pays people in the town to collect used water sachet bags, and in turn deliver them to recycling companies in Accra’s industrial areas. “Not only do we aim to help keep Berekuso clean, we also hope to provide them with an alternative source of income,” said Kwabena.

The second part of the project involves composting. The team has fabricated compost barrels to collect organic waste from the town, to be used as mulch on the farms of the largely agrarian community. This will help provide low-cost, organic manure for their farms. [The Ahote team working on the compost barrel]

Building habits early
With an eye on the future, Kwabena and his team have teamed up with the basic school in Berekuso to get its pupils actively involved in the initiative as well. Through competitions, talks and fun activities, they hope to teach the kids about sanitation while they are still in their formative years. “It is very difficult to root out behavior that has become habitual and seemingly normal,” Kwabena said. “Starting with kids or the youth will help expose them early to these good practices which will become consistent with their way of life and eventually overcome the existing behavior of improper waste disposal.”

Ahote is an Akan word for living in cleanliness and satisfaction, and this is the impact he and his team hope to make in Berekuso.