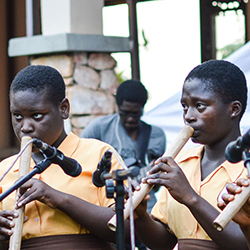 February 4, 2016
It’s a hot Tuesday afternoon, after school in the Berekuso Junior High School, and nine pupils are gathered around Derrick Omari ’18 in a dimly lit classroom. Flute-wielding, cheeks lightly puffed, they play a tune over and over till they get it right. Even though the tune they play lacks the trappings of any masterpiece, their passion is palpable

When Derick was growing up, he quickly realized music was second nature to him. Unlike his peers, he didn’t have to try hard to master an intrument. He taught himself to play the flute and piano. Soon he realized music was more than just a gift he had.

“Music changed my life,” he said. “ I had very humble beginnings, and at a point I had to play flute at funerals and other events to help take care of the home.” Starting the Berekuso Music Project gave him an opportunity to give back. In about five months since its inception, the Berekuso Music project has grown steadily, adding a chorale group to its repertoire, and also attracting more volunteers from Ashesi.

Jonathan and Joshua Ahemderla, both seniors at Ashesi, also volunteer, teaching chorale music in the Berekuso Music Project. “Growing up, we had experiences with chorale, so we thought we could also do a similar thing in Berekuso,” said Joshua. “In the beginning, the students struggled a bit, but after one or two meetings, they started picking up. In Berekuso, there’s a lot of potential.”

“The Music Project on a whole will transcend entertainment,” his brother added. “It will really help open their minds to a lot of things as they get older. It is a form of training. Music helps you stay focused and disciplined.” “The children’s reaction towards the music project is priceless,” said Andrew Osei Bonsu ’15, Community Engagement Officer. “They come with so much joy and readiness to learn something new either on the traditional flute or in the voice lessons given them. For some of them, it’s a rare privilege accorded to challenge them to be better versions of themselves.”

For the students who are part of the group, they are beginning to consider other options with respect to their career. “I want to be a nurse and be a professional flute player as well,” said Princess Mawusi of JHS One. “I enjoy playing the flute so much. It gives me an inner satisfaction and an unending joy. If I learn and play it very well, I can make a living out of it.” With time, the pupils are gaining exposure to the opportunities music could present them. Last fall, the Berekuso Music Project were the center stage at Ashesi’s annual Christmas on the Hill concert, performing alongside members of the community, and earlier this year, a drum troupe from the group was invited to perform at a Teach for Ghana event at the La Villa Boutique Hotel, Accra. For Derick, the Berekuso Music Project gives the children viable options. “If we give these young kids the opportunity, they can use this skill to earn something for themselves. Music gives them options; if they are unable to do well in school, they can fall back on this to make a living.”