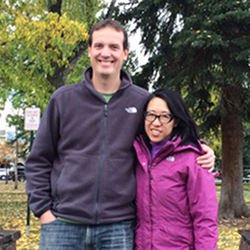 August 23, 2017
As monthly supporters, Melissa and Larry are always up to speed on Ashesi’s latest happenings. For Melissa, this close connection with Ashesi spans since before its inception. As a fellow economics student at Swarthmore College, Melissa became friends with President Patrick Awuah. Reconnecting 10 years later in Seattle, she learned about Patrick’s vision for Ashesi. Here, Melissa shares her story and what keeps her and Larry passionate to stay involved all these years later.

Melissa, I understand that you met Patrick when you were students at Swarthmore. Can you tell us about that time?
[MWA] Patrick and I lived in the same dorm during sophomore year. I remember him telling me about how eye opening it was to study Economics at Swarthmore in terms of understanding Ghana. I was an Econ major at Swarthmore.

How did you and Patrick stay connected over the years until learning about the seed of the idea of Ashesi?
[MWA] About ten years after graduating, I moved to Seattle with my husband. Another Swarthmore alum, Lia Theologides Mukhar (also an Ashesi supporter), re-connected me with Patrick. I got together with him for coffee. He told me about his vision for Ashesi. My first job out of college was in international development so I understood what he was trying to accomplish.

There are many worthy causes to support. What initially appealed to you both about Ashesi?
[MWA] Patrick’s vision of Ashesi was so compelling. It was such a different idea and sounded like it had the potential to transform Africa by teaching critical thinking skills and fostering ethical leadership. At the time, many development efforts (and the money that followed) were aimed at primary education and it was unique to focus on university levels. I also had confidence that Patrick could pull it off.

“Patrick’s vision of Ashesi was so compelling. It was such a different idea and sounded like it had the potential to transform Africa by teaching critical thinking skills and fostering ethical leadership.”

x
Today, you two give monthly to Ashesi. How do you feel each month when you give?
[MWA]When I read the updates and newsletters, I am inspired by the accomplishments of the students and graduates. They are making an impact in their jobs, tackling important problems, and coming up with creative solutions.

Looking ahead, what interests you most about Ashesi’s future?
[MWA] Watching Ashesi and its graduates transform peoples’ lives and institutions across Africa.