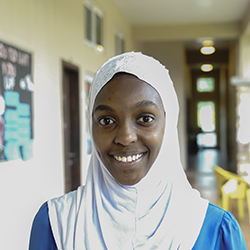 I am originally from Rwanda, Nyamirambo, a suburb in Kigali. It is very dense to a point that almost everyone knows each other. It is also known to be a place of diversity because there are a lot of people from our neighboring countries like Congo, Burundi, and Tanzania. This is because everything in Nyamirambo is affordable compared to other places. So, people who cannot afford expensive things are welcome here. This is very positive because from them I learned new languages like Swahili and French.

I usually describe my life with a saying, “From Ashesi I rise”, because back then my life was so complicated and sad. When I was young, nobody believed in me; everyone thought I was good for nothing because I used to come last in class. They believed that it was something that had to last forever. No one trusted me no matter what I did; there is no such bad feeling like living without any support nor trust, but aside from that I never gave up on trying to become the best version of myself. Little by little I became strong and hard working until I won people’s hearts again. For instance, today my parents cannot decide on anything without consulting me simply because they trust me, and I have proven to them how mature I can be.

I am the second one to attend university in my family.  My elder brother also joined college last year.

“I would like to take this opportunity to thank Jim Ovia
for helping those who cannot afford paying for their
dream schools to achieve their dreams.”

Jim Ovia means a lot to me because as I wanted to come to Ashesi, finances were an issue. My parents were unable to pay for my Ashesi education. So, receiving this scholarship was probably among the best news I ever heard in my life. I would like to take this opportunity to thank Jim Ovia for helping those who cannot afford paying for their dream schools to achieve their dreams.

I chose Ashesi mainly because of its education. Ashesi trains its students to be proactive, honorable, and think out of the box, which is exactly the type of education I need to excel in my career.

I am planning to study Management Information Systems because it is the combination of both Business Administration and Computer Science, which are the courses I need for my future career.

In the future, I would love to become a software developer who is at the same time an entrepreneur to help my country and Africa in its development using the knowledge I gain from Ashesi.