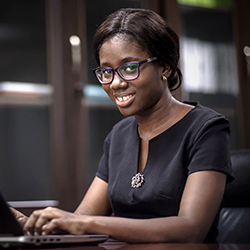 Angela Osei-Kufuor ’07 was always recognized as one of the smartest students in her classes growing up. She was always encouraged to become a doctor, but never connected with the idea. She was far more interested in math, and understanding the connections between numbers. So right from junior high school, she chose to study Business at Wesley Girls High School.

“I did not know what I wanted to become in future, but I was certain I would be in a business-related career,” Angela explains. “Once you study business, there’s very little chance you will step out of that as a career. It is not easy to study business and become a doctor, for example. So when I made that choice, I knew I was sticking to it.”

It was at Wesley Girls High School, that Angela first heard about Ashesi, a small private university that had just started. But even for its relative newness, she was drawn to Ashesi. “The admissions team had visited Wesley Girls to speak about the university’s mission and its education model, and it seemed like an impressive place,” she explains. In 2003, after she had applied, Angela learned that she had been selected to join Ashesi. “I thought to myself that I could go here and if it did not work out, I would make up for it with a Masters in Business Administration.”

Nine years on, she’s made impressive strides in her career…without the Masters. Since graduating with a BSc. in Business Administration in 2007, she has stayed true to her business instincts, working in multiple roles in Ghana’s finance and investments industry. Angela’s first job out of Ashesi was with Strategic African Securities, where she worked in corporate finance.

“I think Ashesi had a lot to do with my getting that first job,” she says. “Generally when you send your CV to a company, it’s added to a pile and you often never hear back. But at Ashesi I got a chance to engage in a lot of career experience opportunities, including internships with the IFC and Goldman Sachs; so when I sent my résumé in, I was called for an interview the very next day. I think I aced that interview, because I had been well prepared.”

After SAS, Angela took a job at African Alliance, where she worked in financial research and analysis. From there she worked at UT Bank, where she worked as an Investor Relations Analyst; her team managed million-dollar capital raising for the bank, and she would oversee the entire transaction process from start to finish. Currently, she is Senior Private Equity Analyst at the First Group Ghana Limited. In her new role she serves in the capacity of Vice-President, reporting directly to the CEO, and handles value analysis for investments the company intends to make, as well as managing all consultant relationships. She also manages overall monitoring for the company’s existing investment portfolios to ensure profitability, work she’s familiar with from her days at Ashesi.

“I got a lot of confidence for my career during my time in school,” Angela says. “From the interactions with classmates and teachers, and the various industry related projects we worked on, it all added up. For example, there was one class we took where we had to grow an investment portfolio on the Ghana Stock Exchange. Choosing stocks and growing income off that portfolio was one of the projects I enjoyed the most at Ashesi. That kind of classroom experience means that there are a lot of similarities between what I did in school, and what I am doing now, and this makes it easier.”

Angela enjoys the work she’s doing now, and hopes to continue building on her expertise in finance and investment. In retrospect, she believes that even though the teaching and learning at Ashesi put her on the right footing, the connections she made were equally important. “Beyond what you learn at Ashesi, you also get to meet the right people. My classmates are in all kinds of positions, and if I needed any help there’s a whole host of people I can call on. There’s a lot of knowledge you can tap into if you have the right classmates.”

“I have also come to understand that having Ashesi on your CV brings you a lot of credibility. I remember a meeting I had in a previous job, where I was sitting with my Deputy Managing Director and General Manager discussing work. I had said ‘and then when I was at Ashesi…’, to speak to an example; the Deputy Managing Director said immediately said, ‘you went to Ashesi? No wonder!’ I always tell this story, because that was a really proud moment for me. It is a reminder to me that not only do I represent the values of Ashesi, but that the institution itself has a lot of respect. It is a great feeling to be an Ashesi graduate.”