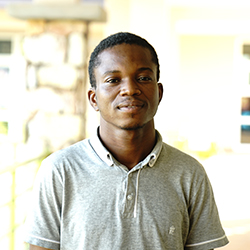 I was born on August 15th, 1997 to Mr. Abraham Nereh Gbanwou and Mrs. Modesta Lefeena in Jenbob, in the West District of the Upper West Region of Ghana. Both my parents were farmers until death took my father away. Fourteen years ago, I was enrolled in Jenbob primary school after caring for cattle for four years alongside farming. On September 14th, 2004, my father who was still in the hospital bed asked me to leave his cattle and go to school. It was a day of mixed feelings for me — the joy of meeting new friends and the fear of losing my father. Never expecting anything wrong to happen to my father and wishing that he would recover quickly, I started attending school. Unfortunately, my father passed away in that same year.

I dropped out of school to assist my mother on the farm after seeing the trauma she was going through. I hated to see my mother shed tears to look for food for us. I was always thinking about how my future and the family would be. I was ready to go back to school and learn to save my family, but who would help me? It was so heavy for me as you can imagine. After a year, my mother realized that farming alone would never help us in the future. So, she decided to engage in charcoal burning to raise money to enable my siblings and me to go back to school. So, I went back to school on September 1, 2005.

Starting school again never made me stop farming. My mother quickly adjusted my time of farming to early morning from 5:30 am to 7:30 am (before going to school) which usually continued from 2:30 pm to 6:00 pm every day including Sundays.

Being one of the elderly sons, I believed that every effort I gave was a prerequisite for survival. It was ‘normal’ seeing a pupil in primary school walking barefoot and wearing ‘rags’ — torn shorts and shirts to school. It is evident that I was one of such children. I attended my entire primary one year without ever wearing anything under my foot. That wasn’t a problem as it seemed reasonable to everyone. All I needed were my exercise books, a pencil, and my friends. All these hardships in my life never discouraged me but instead strengthened me to endure harder times in the future.

My passion for alleviating human suffering motivated me to study hard to become a medical doctor so that I could save lives. I surpassed my classmates academically from upper primary school through junior high school. An NGO, upon seeing my potential, decided to sponsor me through the second cycle institution. Taking away part of my mother’s burden motivated me to study hard to achieve my dream of becoming a medical doctor.

“My passion for alleviating human suffering motivated me to study hard.”

After completing the Basic Education Certificate Examination conducted by the West African Examination Council, I excelled in all my subjects and was selected as one of the best five candidates in my district. Though an NGO was there to help me pay my school fees, my mother could not still raise enough money for me to buy personal items such as soap, pomade, washing powder, and the likes.

I received admission to St. Francis Xavier Junior Seminary in 2013 to study general science, in an attempt to achieve my dream. Back at senior high school, I used to study so hard and “trouble” my mates when it comes to exams. This attracted a lot of friends to me and gave me the opportunity to borrow their pamphlets. I was exceptionally good in chemistry, math, science, and biology. This made my housemaster always to choose me to represent our house in inter-house science and math quizzes.

This built my confidence level. Becoming a medical doctor never escaped my mind whenever I went back to the village. After successful completion of my education in 2016, I was confident that I was going to study medicine. When the results were released, I scored 7A1s and a B in English Language, a good grade that could secure me a place to study medicine. Unfortunately, my sponsorship from the NGO expired. There was no source of money for me. Things became tough again for me after senior high school. So, I was compelled to go back to the village to assist my aged mother on her farm. I stayed throughout the whole of 2016 and 2017 at the village.

Receiving this scholarship is a miracle in my life because I never believed I would go back to school after all the trauma I went through. I think that the Jim Ovia Foundation Scholars Program will help me to learn in peace to acquire a degree that will enable me to give back to society. I want my sponsors to know that I will study very hard in school to achieve the purpose for which this scholarship has been awarded to me.

I chose Ashesi university because of their educational structure and the opportunities available, such as Ashesi Success, career services, and leadership training. Also, I would not have been able to go back to school if I had not won a scholarship and this is made possible through Ashesi.

“The Jim Ovia Foundation Scholars Program will help me to learn in peace to acquire
a degree that will enable me to give back to society.”

I am currently studying Electrical & Electronic Engineering. In senior high school, mathematics and biology were my best subjects, and so I decided to study medicine or a math-related program because that is where I can significantly contribute to development in Africa.

Looking into the future, I see myself as an international expert in automation and programming, establishing a company to employ the growing population of Africa. I also plan to build a clinic for my village to help curb the issues of maternal mortality and premature deaths.