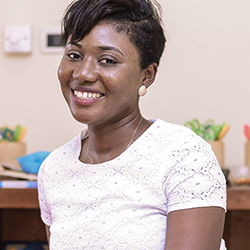 To Edwina Reynolds Baiden ’15, cooking is second nature. It is not just a talent; it’s something she’s always loved to do. However, while taking Dr. Esi Ansah’s Leadership 4 class at Ashesi, she discovered a new passion for child development. With time, she begun to explore ways to combine both passions, and not too long after she and her sister Sonia, co-founded Le Petit Chef; a summer culinary school for kids.

“I thought cooking would be an interesting and fun way to teach kids good values in a healthy environment,” said Edwina. “My sister bought into the idea and together we started Le Petit Chef. To our pleasant surprise, we had quite a number of early participants patronizing our idea. However, we realized that whenever school resumed numbers were low as most of the kids already had after-school programs in the schools they attended.” In their bid to solve the issue of low enrollment numbers, they stumbled upon the Montessori teaching approach; a model which focuses on holistic human development as opposed to solely academic development in regular school systems. They subsequently evolved the culinary school into the Baiden Christian Montessori.

“The Montessori model allows kids to develop independence in their thinking and behavior,” explained Edwina. “They learn to explore and lead on their own. Unfortunately, in Ghana, the training most kids are given lacks these foundational values.” While Edwina combined setting up the school with her own schoolwork at Ashesi, Sonia left her job in the oil and gas industry to help run the school. In the few months since its inception, Baiden Christian Montessori has grown steadily; initially starting with one student to about ten working towards enrolment this fall semester. At Baiden Christian Montesorri, Edwina and her sister and their faculty train the kids in a well-rounded approach. Aside academic work, heavy focus is placed on soft skills and extra curricular activities such training in music, ballet, cooking and languages.

“Our philosophy is building blocks for little brains,” she explained. “We believe there are necessary things that kids need to know at a certain age, so we have specific building blocks that we want to start them off with: Godliness, strong Christian values, love, sense of responsibility, leadership, and an appreciation for diversity. We try to institute these through the activities we do in the school and also allow the children to use their potentials to explore their own interests.” Currently, the school caters for kids in the crèche, and kindergarten levels. After national service, Edwina turned her full attention to Baiden Christian Montessori where she now handles all the school’s marketing and administration. She and her sister have bought strongly into the Montessori system; developing each pupil beyond academics, and hope to extend this system beyond Ghana. “We do certainly want to be Africa’s foremost and most sought after Christian Montessori school,” Edwina says. “However, ultimately, our vision is to provide a secure, innovative and fun Christian environment, to foster each child’s unique growth and development potential.”