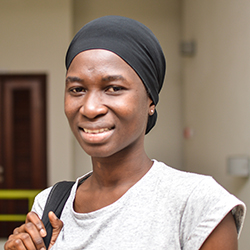 Born in Nima, a neighborhood of Accra, Ghana, Fauziya is the third child of six. Fauziya grew up facing cruel stereotypes about people from her neighborhood. In school, teachers and students often treated her differently – Nima Girl was a common nickname. “I used to be angry whenever people treated me differently. I didn’t understand why being born in Nima equated me with negative stereotypes. I realized it was up to me to change their opinion; to judge me for who I am and not where I come from. I learned from that point onward that it is up to you to determine how others see you.”

In high school, Fauziya saw that most of her female friends were betrothed to be married after graduation. She realized that many had done so in order to secure a husband who would pay for their college education. Fauziya refused to finance her college education this way.

“I did not want to get married for the sole purpose of finding a means to pay for my education. I wanted to show young girls they do not need to get married to have an easy life; they could become accomplished through their own efforts. Putting my future in the hands of a person who could change his mind at any point in time was not a risk I was willing to take.”

After high school, Fauziya learned about Ashesi from a teacher and an Ashesi alum. A few friends tried to discourage her from applying, claiming that Ashesi was too competitive and financially out of reach. Fauziya dismissed this chatter, applied to Ashesi, and ultimately received a scholarship to pursue her dream. Today, she hopes to be an inspiration to young girls who consider marriage their only option to securing a better life.

“I hope my four year stay in Ashesi is life changing and opens many doors of opportunities for a bright future.”