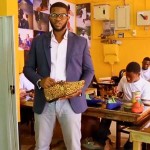 A few years ago, Fred walked out of a store in Ghana with a new pair of high-end Pierre Cardin shoes. As he admired his new shoes, Fred wondered why craftsmen in Ghana could not have made them, and it was this very question he asked the cobbler he ran into as he walked out of the store. The answer he received from the cobbler, that it was “impossible”, was one he was not expecting – especially since Ghana’s craftsmen are renowned for their skill.

“I was surprised! It was almost as if I had asked him about making a spaceship,” says Fred. “But I realised that it fit with a widespread Ghanaian dependency on foreign innovation. Local entrepreneurs had moved away from competing with luxury brands worldwide because it had become almost impossible to gain as much acceptance – especially on the perceived quality of products.”

But after that shoe purchase, and the conversation with the cobbler, Fred went on to help lead a charge against this perception. He co-founded a shoe company with one mission in mind: to make shoes in Ghana that would be better than the foreign ones he had purchased.

“It was unorthodox, and unusual, but we decided to make shoes. We wanted to show Africa that we were just as capable as entrepreneurs anywhere, of making high end products right here at home.” The name of the company, Heel The World (rather than “Heel Africa”), was the signifier that Fred and his partner were looking to make an impact not just on Africa, but on the world. “Heel the World is more than a shoe company – it is a social enterprise that counters perceptions of the quality and capabilities of Ghanaian craftsmanship.” In addition to their shoes, Heel The World also makes wrist beads – called ’empowerment beads’ – that have gained a loyal following since they started selling in 2011.

“Our mantra is that hard work is rewarded, and that’s what our beads represent. The black stones represent struggle, and the one gold bead represents what we all work for – the reward. We hope that it can serve as a reminder, in times when people are overwhelmed and feel disheartened, that there’s a reason we do what we do.” Now, Heel The World’s beads and shoes have not only helped reshape shoemaking, but also mindsets for consumers in Ghana. “Heel The World is a little over a year old and I can see the change in people’s perception of locally made goods already.”

At Ashesi, Fred served as the second president of the Student Council, and played a lead role in helping define a culture for Ashesi’s student community. “It was something else. I went from a low grade point average to the Dean’s list. After months of hard work and lots of support from my lecturers, I went from trips to the Dean’s office to discuss bad grades, to visiting the President’s office to discuss progress for the university. Ashesi changed me.”

Today, with his experience at Ashesi and a year after starting a shoe company, Fred is working to teach more young Africans about entrepreneurship and leadership; and Heel The World’s presence is being felt all over the world. The company is providing jobs for local shoemakers, has supported other young entrepreneurs financially and is planning to set up a resource repository for would-be entrepreneurs to tap into. Heel The World also runs a small foundation that continues to work with non-profit organizations to support deprived communities in Ghana. When asked how he would describe himself, at the World Economic Forum in Ethiopia where he was one of 32 Global Shapers in attendance, Fred replied: “My name is Fred Deegbe, and I’m a shoemaker. This is how I Heel The World.”