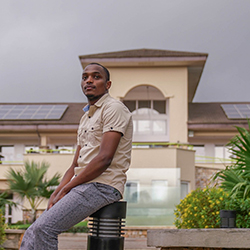 Growing up, like many kids my age, I was clueless about what I wanted to do for a career. At some point, I wanted to be a medical doctor, and then considered being a pilot, and in between these I considered many other options. However, after seeing my first ever spy movie, I was convinced I wanted to be involved in working around puzzles and logic — this is when I learned about Computer Science. So when it was time for university, I was on the lookout for a strong Computer Science program. That was when I heard about Ashesi University, a growing institution with a solid computer science program all the way in Ghana. When I applied and got in as a Mastercard Foundation Scholar, even though I was excited, I had mixed feelings about moving away from home. I knew that at some point in my life, I would have to take risks. Why not start now?

My first day in Ghana, I remember looking up the hill and seeing the lights of the University building after miles of greenery. It was at this point that I was convinced I had made the right decision. Despite the new atmosphere, vastly different from home, I was immediately struck by the warmth in the community — people were willing to interact with me and help out once I made the effort to reach out. Getting used to the cuisine took some help from the caterers who were willing to gradually introduce spice to my food. I also joined the debate team, where I learned to effectively balance school work with extra-curricular activities. Finally, being a part of the football league was useful in helping to ease my interaction with many of my classmates. So I learned very quickly that being an international student was no good reason to not be involved on campus. All I had to do was simply take the step. Over time, I found that not only did I get to train as a Computer Science student, but also I got to grow in many other ways. By my third year, I joined the Student Council, and also volunteered with the school’s career counseling office, helping students clean up their resumes and prepare for job interviews.

Being at Ashesi definitely gave me a new perspective and enabled me to take more initiative. I gained the confidence to share my thoughts and opinions and even stood for Student Body President. Even though I lost the election, it was a profound experience for me, as it taught me to always go for what I want. The worst that could happen is a failure, which shouldn’t be a barrier since I can always keep trying. This attitude I adopted at Ashesi has now rewarded me with an opportunity to work as an intern, at Goldman Sachs as a Technology Analyst in London, despite 2 initial rejected applications. Four years down the line, I have grown from a wide-eyed freshman from Uganda to adopting Ghana as my second home and becoming a Computer Science graduate. I may not be writing code for espionage as I saw in the movies, but I will be writing code to create an impact on the global financial markets.

All in all, Ashesi was a risk worth taking and leaving Uganda for four years, was a journey worth embarking on. The ups, the downs, the good and the bad helped me connect the dots to who I have become.