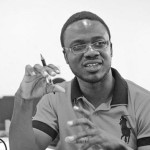 The core values of Ashesi are Citizenship, Scholarship, and Leadership. Kpetermeni Siakor ‘15, a recent Ashesi graduate, epitomizes these values. While at Ashesi, Kpetermeni studied Computer Science and initiated numerous projects on campus and beyond.

In the midst of the Ebola crisis last year, Kpetermeni participated in daily Skype conferences with his former colleagues at iLab Liberia, a not-for-profit technology space which he helped start. The iLab Liberia team had spoken to as many people who were directly involved with the outbreak as possible. They learned that because health workers collected only paper records of Ebola cases, there were long lags between data collection and transmission to the health ministry, emergency dispatch delays, and general confusion among health workers—which slowed down efforts to track, control, and ultimately stop the disease.

Armed with feedback, Kpetermeni and his colleagues developed data tools for the health ministry in Liberia. Kpetermeni could develop software remotely from Ghana, but when the iLab team experienced problems that stopped the project’s rollout — the effort to provide computers, set up reliable internet connectivity, and coordinate iLab volunteers to digitize paper case forms and track Ebola contact cases — he struggled to help from his dorm room in Ghana. During the outbreak, Kpetermeni received permission from the UN to leave Ghana and join an emergency flight to Liberia. “But then,” Kpetermeni said, “I realized that instead of continually asking how can I help — which no one knew how to answer — I needed to let the team simply talk me through what they were already doing.” Kpetermeni had to listen very carefully, working to hear the unspoken gaps in the process. Finally he was able to guide his Liberian colleagues to get the system working.

“Now that Liberia has been declared Ebola-free, we can continue our work to strengthen the weak systems that allowed it to grow so quickly in the first place.”

At Ashesi’s 2015 Commencement ceremony, Kpetermeni was presented with the President’s Scholarship, Leadership & Citizenship Award. Given on an annual basis to graduates who have lived out Ashesi’s core values during their time at the University, this is the highest award a student can receive at Ashesi. Below is President Patrick Awuah’s speech to Kpetermeni:

“From the moment he set foot on campus, he has been selfless, and dedicated to improvement, both on and off campus. In his very first year on campus, he built software tools that aimed to expand access to learning material for students with little Internet access; tools he would later deploy back in his home country, Liberia, with funding support from generous donors, including Google.

He helped build and deploy transaction software for our canteens, that allowed students to make purchases with their ID cards, and that helped reduce cash handling on campus. After deployment, he continued to remain on call around the clock, to guarantee the system was up and running always.

In his junior year he stepped up to a stronger leadership role on campus, winning elections to become the Head of the student government Judicial and Electoral Committee. In this role, he defended the Ashesi Honour Code with passion, and encouraged everyone on campus to assign the highest importance to it, from faculty, to his classmates.

In 2014, as the Ebola virus swept through parts of West Africa, he reached out to his colleagues back home in Liberia, asking for ways to help. Together, they deployed software that helped the Ministry of Health effectively track Ebola outbreaks, boosting their response ability, and helping drive down infections.

In his four years here at Ashesi, this student has been an ultimate citizen; of Ashesi, of Liberia, of Africa, of the world. Building hope, building bridges for the disadvantaged and serving as inspiration in a time when young people are constantly challenged to help mend the world they will lead one day.