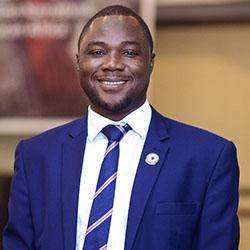 In 1994, a major conflict between the Nanumba and Konkonma ethnic groups in Northern Ghana left over 1,000 people dead and tens of thousands displaced.

Among the displaced were young Mutaru Mumuni Muqthar ’07 and his family, who relocated to Tamale, the capital town of northern Ghana. Here, Mutaru began to get a sense of what he wanted to pursue as a career.

“In Tamale, there was a pervasive presence of peace,” he recalled. “There were numerous organizations dedicated to providing relief and facilitating peace-building efforts. This environment influenced me, and I began to see myself also working to promote peace and security within my community.”

After earning a degree in Business Administration at Ashesi, Mutaru worked as a consultant in the oil and gas industry. There, he gained exposure to the breadth of wealth, poverty and conflict across the continent and revived his dream of working to transform people’s lives. In 2011, he spoke about the Arab Spring conflict in a panel discussion on the BBC Focus on Africa show. The experience provided the spark he needed to do something about the growing threat to peace and security across the continent. “Participating on the panel rekindled my spirit, in terms of working in peace and security,” he explained. “This is really what I needed to be doing.”

In the years following, he left his job in the oil industry, completed a master’s degree in International Terrorism and Global Crime in the United Kingdom, and founded the West Africa Centre for Counter-Extremism (WACCE). The organization focuses on countering the foundations of violent extremism and radicalization in vulnerable communities.

“We believe that the fight against terrorism and the ideologies that underline terrorism cannot be won on the field alone. They have to be won in the mind-sets of young people,” he explained. “So, we target young people as a group and work within their communities to address radicalization—the single biggest factor that gets individuals involved in terrorism.”

Through WACCE, Mutaru and his team work across West Africa to engage radicalized and de-radicalized youths in vulnerable communities, whom they help to reintegrate into the society, school or work.

Founded in 2015, WACCE’s impact has been far-reaching. In 2017, Mutaru was named a Mandela Washington Fellow and Daily Trust African of the Year for his organization’s work in countering radicalization and terrorism. “It’s an improbable award for me,” he shared. “This is nothing at all I‘ve ever expected or hoped for. Being recognized alongside other leaders who have accomplished much in their fields is humbling. The recent accolades are a huge endorsement that the work we’re doing here is important, and also is of great service and value to society.”

For Mutaru, the first of his sixteen siblings to graduate from college, the will to leave the lucrative oil industry and devote his career to promoting peace and security is drawn from his days at Ashesi.

“Ashesi opened the world for me, in terms of what I believed I could do,” he said. “The kind of educational experience we had, helped build my understanding of what I could do. My ability to interact with people from different social classes, my ability to organize, my ability to initiate things – all skills I picked up in the classroom.”

Moving forward, Mutaru is optimistic about peace and security across the continent, through the work that WACCE continues to do.

“Security is a constantly changing dynamic,” he said. “We also see ourselves playing a critical role in providing methodologies towards countering security threats across the continent. Eventually, we hope to serve as a leading organizing for security and democratic stability in Africa.”