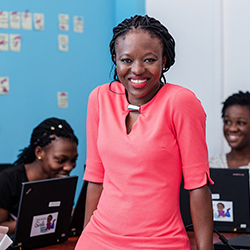 After graduating from Ashesi top of her Computer Science class, Regina joined a multinational bank, as the first and only woman on their IT team. As a woman in a male-dominated environment, she learned quickly that she had to work twice as hard to get noticed. And she did. She was eventually promoted to managerial level within the bank, but felt dissatisfied with her career impact.

“I had the secret desire to start my own company but was not bold enough to take the first step,” she explains. “Banking provided security and comfort; entrepreneurship felt too risky. So I ignored what I truly wanted and went to work for a smaller local bank instead. I tried to convince myself that my problem was the boredom associated with working for a larger institution and that developing software for a local bank would be better. I was wrong. It took me four years and a lot of sleepless nights to realise that when you have a dream and a desire, it is like an alarm clock going off inside you. Hitting the snooze button doesn’t work; the alarm will just go off again. Eventually, you have to wake up.”

After six years helping develop software systems for the bank, Regina eventually gathered courage to start her own business, Soronko Solutions. Through the startup, she’s building software for organisations, for charities and helping empower young women to pursue careers in technology. Among the projects that she has launched at Soronko include one that introduced deaf girls to technology at the State Deaf School in Ghana — including apps that help promote communication in a society where use of sign language is limited.

Regina’s story has been featured around the world, and she is an Aspen Institute New Voices Fellow and a GOOD Fellow. She was also a finalist for the African Digital Woman of the Year, and a Change Leader with Tigo Ghana’s Reach For Change. In 2014, she was also selected as a Washington Fellow under President Obama’s Young African Leaders Initiative, and is currently a Global Shaper of the Accra Hub, part of the World Economic Forum.

“I am very fulfilled and love what I am doing. Listening to my inner voice was the best decision I’ve ever made. Each morning when I wake up, I am thankful for a new day and look forward to a bright future where my technology solutions and success stories will be replicated in other developing countries.”