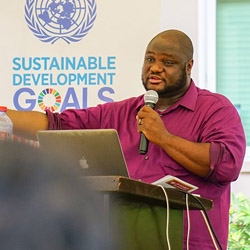 April 2, 2018
Get Out, Black Panther, 12 Years a Slave, Lemonade – all widely acclaimed productions that do more than entertain. Each, in a unique way, depicts narratives of the effects of the transatlantic slave trade.

“In all these, you see the desire to reconnect with the ancestry,” explained Ashesi Lecturer Eli Tetteh. “They depict the struggle as a continuous journey and trajectory as African people have experienced right from the continent to the diaspora.” In his lecture Remember Slavery: Triumph and Struggles for Freedom and Equality, Eli Tetteh provided a broad analysis on 21st century examples of pop culture.

He touched on the challenges that are being addressed in the movement towards freedom and equality by people of African descent, in the diaspora, and on the continent. He further stressed the need to study slavery and the slave trade from a broader perspective, beyond focusing on pains and gains.

“There’s an intertwining of the diasporas’ narrative, African American and African at the same time,” he said. “Can we overcome our difference and unite as a black diaspora? There’s a lot to be explored: as to what costs to liberation are there for us. It is worth us asking ourselves: do we value our culture, do we value our heritage and are we making efforts to bridge the gaps that lie between the various facets of the diaspora? There are still deep wounds to be overcome and they become more apparent as pop culture keeps revisiting these themes in so many different ways.” Tetteh’s lecture was part of the United Nations Information Center event to commemorate the 2018 International Day of Remembrance of the Victims of Slavery and the Transatlantic Slave Trade. Each March 25, the UN observes the day as a tribute to the more than 15 million men, women, and children who suffered and died during the more than 400-year transatlantic slave trade, the largest forced migration in history. The day also shines a light on modern-day racism and prejudice.

This year’s commemoration was held at Ashesi. Besides the lecture, there was an exhibition titled A Legacy of Black Achievement. Produced by the International Slavery Museum in Liverpool, UK, and adapted from that institution’s Black Achievers Wall gallery, the exhibition featured 21 notable personalities from various backgrounds, eras, regions, and disciplines who paved the way for civil and human rights, as well as recognition and justice for people of African descent across the globe.