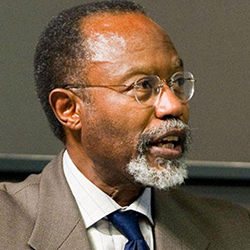 October 23, 2016
Dr. Phillip Clay, former Chancellor of the Massachusetts Institute of Technology (MIT) and a current board member of the MasterCard Foundation, believes that transformation of the African continent is hinged on quality tertiary institutions. Yet, “the passion is not there, and there’s often more resistance than there is initiative,” he says.

In a TED talk, Clay shares four areas he believes are necessary for this transformation within African universities: engagement of Africans in strengthening their tertiary institutions, engagement from well-established foreign universities and corporations, models of scalable excellence and new venues for collaboration.

“Universities do not develop out of whole cloth,” Clay explains. “They emerge because there’s a public commitment to them, or because there’s a civil society that supports institutions that are created to advance particular purposes.”

In sharing how MIT was founded by Barton Rogers as an institution to take on the challenges of the industrial revolution, he stated that Ashesi, which was founded on a mission to train ethical and entrepreneurial leaders in Africa, is one of few universities that is making the needed progress.

“It is urgent that we develop some passion about this,” he continued, urging stakeholders to collaborate to support the transformation. “Because no nation on earth has ever developed sustainable development – social or economic-without the identification, development and deployment of their own talent. We can’t leave 15% of the world’s population out of a game that is increasingly recognized and embraced.”