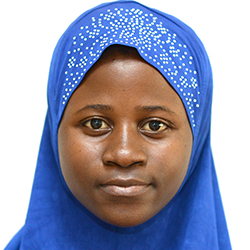 July 19, 2017
Khadijahtu Mohammed was born in Accra, Ghana and raised in Kasoa, a suburb of Cape Coast. The third of four children, Khadijahtu grew up in a family that was often unable to make ends meet. Despite these financial challenges, she was motivated to achieve her goals through determination and hard work. “I had very little time to play, as everyone expected me to be the best I could be. My parents bought me books which did not relate to what I was being taught at school, but I read them to widen my exposure to knowledge.” Khadijahtu’s academic aptitude shone as early as elementary school, where she became the first ever student at her school to receive Grade 1 in all subjects, the highest possible performance.

This commitment to education continued through high school. In her senior year, Khadijahtu was named Most Hardworking Student in her boarding house and Most Cooperative Student by the Ghana Muslim Student Association. However, her dream to attend college seemed out of reach due to financial constraints. That is, until one day when Ashesi was introduced as a university that widely offered need-based scholarships. Through the benevolence of a family friend, Khadijahtu was able to pay for Ashesi’s admission and scholarship forms. “I would have considered teaching in private elementary schools to raise enough money to apply again to Ashesi if I had not been accepted.” Thankfully, Khadijahtu’s hard work paid off. “Gaining admission to Ashesi with full scholarship was the best opportunity that ever came my way,” shares Khadijahtu.

“Gaining admission to Ashesi with full scholarship was the best opportunity that ever came my way…I see myself becoming an entrepreneurial leader with good ethics that inspire others,” shares Khadijahtu.

Now at Ashesi, Khadijahtu often cites the quote that inspired the University’s name: “If there is anything you can do, or dream you can, begin it. Boldness has genius, power and magic in it. Begin it now.” Khadijahtu says, “These words by Johann Wolfgang von Goethe motivate me in my holistic education in Ashesi. I see myself becoming an entrepreneurial leader with good ethics that inspire others.”