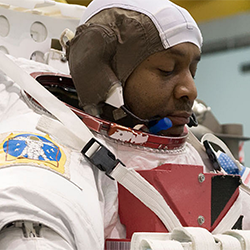 Dr. Satcher was selected by NASA in May 2004 to be an Astronaut Candidate. In February 2006, he completed Astronaut Candidate Training that included scientific and technical briefings, intensive instruction in shuttle and International Space Station systems, physiological training, T-38 flight training and water and wilderness survival training.

Dr. Satcher flew on STS-129 in November 2009 and has logged more than 259 hours in space, including 12 hours and 19 minutes in two EVAs. Dr. Satcher left NASA in September 2011 and currently is on staff as a Surgical Oncologist at MD Anderson Cancer Center in Houston, Texas.

With his extensive Engineering experience, we look forward to hosting Robert, and hearing him speak to the power of an Ashesi engineering education. The inauguration ceremony is open to the general public.