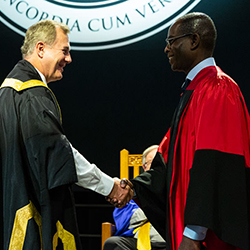 June 16th, 2018 – The University of Waterloo in Canada, as part of its 2018 Commencement activities, presented Ashesi’s Founder and President Dr. Patrick Awuah with an honorary Doctor of Engineering degree. The University is widely known as one of the world’s best Engineering universities, and faculty from the university played key roles in helping Ashesi develop our Engineering curriculum. The honorary doctorate was one of nine presented by the University of Waterloo this year; and is the third honorary degree received by Ashesi’s President, after honorary doctorates from Swarthmore College in 2004 and Babson College in 2013. Dr. Awuah also delivered a Commencement Address to members of Waterloo’s Engineering Class of 2018 (watch here).

The doctorate was presented to Ashesi’s President, for his exemplary work starting a University in Ghana that aims to change how leaders in Africa are educated; and for the start of an Engineering program at Ashesi that focused on not just teaching skills, but also on teaching ethics and leadership.

“The Ashesi Engineering program was the first in Ghana to incorporate mandatory courses on ethics and leadership for all students, and has an honor code unlike anything else in all of Africa,” read Dr. Paul Fieguth, who introduced Dr. Awuah at the Waterloo Commencement Ceremony. “Under Patrick’s leadership, Ashesi University has chartered new territory, very much shaking up the educational status quo. It has forged strong connections with industry, produced a large number of startup companies, and has a rigorous and challenging curriculum. Patrick and Ashesi exemplify the ideals which all University of Waterloo engineering graduates should want to aspire to: rigor, principle, entrepreneurship, and making the world a better place.”

Launched in 2015 after nearly three years of curriculum design and development, Ashesi’s Engineering majors – Computer Engineering, Electrical and Electronic Engineering, and Mechanical Engineering – place emphasis on hands-on learning, entrepreneurship, design, and problem solving, and equips students with skills to create long-term solutions to Africa’s engineering challenges and deploy better-designed infrastructure for local needs. The honorary doctorate was awarded in part, in honor of Dr. Awuah’s work in leading the establishment of such an Engineering program in Ghana. “Winner of the MacArthur Fellowship, the McNulty Prize, repeatedly listed among Ghana’s most respected CEOS, and identified as one the World’s 50 Greatest Leaders by Fortune, Patrick has been widely recognized for his groundbreaking work,” read Dr. Fieguth. “Mr. Chancellor, in recognition of his outstanding contribution to leadership education, a transformative vision for Africa, and founding a university even younger than the University of Waterloo but no less transformative and outstanding, I request that you confer the degree, Doctor of Engineering, honors cause, upon Patrick Awuah.”